We hope everyone’s new year is off to a great start!

This week, we’d like to recommend some pheromone combos to those of you who like to experiment with mixing different products.

Mixing pheromones together is a great way to enhance different products’ best qualities. As you know, some pheromones can be a little too strong or aggressive when worn alone (Primal Instinct for Men is a common example of this); others do their job really well, but can be limited in their range of effects (such as social pheromones that do a great job of relaxing people but aren’t the best at enhancing sexual attraction). But when you combine one product with another, you can give them both the qualities they’re missing, and possibly smooth over any bad side effects one of them may have.

If you’d like to learn more about mixing pheromones, there are several resources available to you:

As the above resources will tell you, the idea behind pheromone combos is to create a whole that is greater than the sum of its parts. This can mean combining pheromones with different effects, such as social pheromones with sex pheromones, or taking two pheromones that serve a similar purpose and helping them work better than they do alone, such as a combination of less-aggressive sex pheromones. So it’s important to know what the individual elements do, and how they can complement other pheromones, when beginning to experiment with mixes.

To get you started with potential mixes you can experiment with, we have some examples of great pheromone combos that complement each other nicely–and which can be yours for under $100! Have a look: 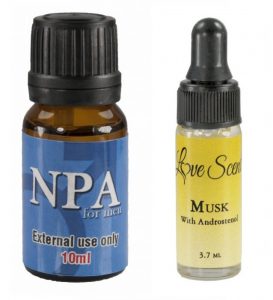 This combination is part of our Beginner Specials, because it’s a great starter mix using two dependable and versatile pheromones. The Love Scent Pheromone Oils contain the powerhouse social pheromone AndrosteNOL, which has a wide range of mood-elevating and relaxing effects. The New Pheromone Additive contains more AndrosteNOL plus two sex pheromones: AndrosteNONE, which promotes sexual attraction, and AndrostaDIENONE, which boasts effects ranging from elevated mood in women to increased generosity in people of all genders. The AndrostaDIENONE, however, has the downside of depressing men’s moods and potentially intimidating them–drawbacks that are alleviated with the extra boost of AndrosteNOL provided by the Love Scent Pheromone Oils.

Overall, this is a good mix for people who want the sexual power of the New Pheromone Additive but are worried that the sex pheromones will be too strong, or have too many bad side effects, when worn on their own. If you naturally have high sex pheromone levels or have noticed that sex pheromones tend to be very strong when you wear them, consider trying this combo!

Because the Love Scent Pheromone Oils are scented, in this mix they double as a cover fragrance. There are currently five fragrances to choose from:

Choose whichever fragrance appeals to you the most!

To begin with, we recommend trying this combination at a ratio of 2:1–two drops of the Love Scent Pheromone Oils to one drop of NPA. Pay attention to the effects and adjust as needed! 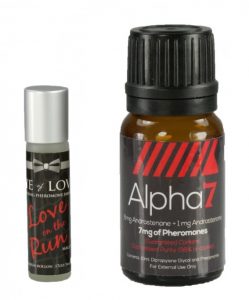 This is another one of those pheromone combos that smooths out the potentially bad side effects of a powerful sex pheromone. In this case, the sex pheromone is Alpha-7 Unscented for Men, a popular and very strong combination of AndrosteNONE and AndrosteRONE. When this pheromone is worn alone, the AndrosteRONE works to counteract the often aggressive side effects of the AndrosteNONE, but many wearers (especially young men) find that Alpha-7 is still very strong when it is not paired with something else. That’s where Rebel comes in: this musk-scented pheromone cologne contains the soothing social pheromone AndrosteNOL, which balances out the aggressive effects of the sex pheromones.

If you like the sexual magnetism you get when wearing a strong sex pheromone, but have found that some people get shy, nervous, or irritated around you when you wear them, this combo may be just what you need!

Like the Love Scent Pheromone Oils in the above mix, Rebel does double duty in this combo as a cover fragrance. The scent is a sweet, fresh musk, which works well to cover up the natural body-odor smell of the Alpha-7 Unscented.

We recommend starting with a 3:1 ratio with this mix–three parts Rebel to one part Alpha-7 Unscented. Roll some of the Rebel on your wrists and throat and then add a drop of Alpha-7. Add more or less of one or the other as needed! 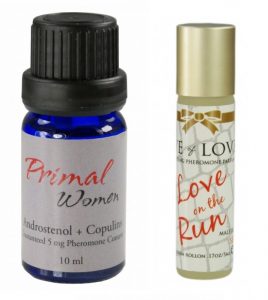 3. Seduce for Her + Primal Women

As we said earlier, some pheromone combos aren’t about balancing out one part’s bad side effects; sometimes they’re actually about intensifying the effects of each component. This mix is one such example! It combines Seduce for Her, a floral perfume containing the romantic and cuddly sex pheromone Estratetraenol, and Primal Women, a nicely balanced unscented pheromone that contains the social pheromone AndrosteNOL and the potent sex pheromones known as copulins. Estratetraenol has a strong impact on men’s (and gay and bisexual women’s) romantic feelings for their partners, and copulins has been shown to have intense emotional and physical effects on straight men. When these two are combined with the relaxing element of AndrosteNOL, you have a very romantic, cuddly, and sexually-charged mix.

This is a great mix for women, regardless of their sexual orientation, who want to foster a more emotionally and sexually intimate relationship with their partner. If you’re ready to get serious in a new relationship, or bring the spark back to a relationship you’ve been in for years, this mix could be perfect for you.

Seduce for Her contains a floral cover fragrance with notes of bergamot, jasmine, and rose, so it doubles as a cover fragrance in this mix. It works well to cover up the intense smell of the copulins found in Primal Women.

Try a 1:1 ratio of this mix to begin with. Roll some Seduce on your wrists and throat and add a drop of Primal Women.

UPDATE: We no longer carry Seduce for Her. Try NPA for Women with your favorite cover fragrance instead! 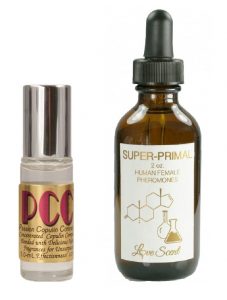 This is definitely the most sexual of our recommended pheromone combos. It pairs Passion Copulin Concentrate, a sexy pheromone perfume laced with the sex pheromones called copulins, and Super Primal for Her, an unscented product containing a user-friendly low concentration of the potent sex pheromone AndrosteNONE. Copulins are well-known for their powerful effects on men, ranging from intense emotional connections to increased testosterone levels, and AndrosteNONE increases the sex appeal, confidence, and authority of the person wearing it. The end result is a very potent, very sexual pheromone perfume for women.

This is a good mix for women who don’t have any trouble with socializing or meeting new people but want to give their sexual magnetism a boost–whether in the hopes of meeting someone new or bringing some sexual sizzle back to a long-term relationship. If this is you, consider giving this combo a try!

In this mix, Passion Copulin Concentrate works as a cover fragrance: it already contains a fresh, fruity perfume that smells of cucumber and melons. It masks the natural smell of the copulins and the AndrosteNONE.

We recommend a 1:1 ratio to begin with for this mix. Roll the Passion Copulin Concentrate on your pulse points like the wrist and throat, and add a drop of Super Primal for Her on top of it.

A 5 ml roll-on bottle of Passion Copulin Concentrate is $29.95, and a large 2 oz eyedropper bottle of Super Primal for Her is $59.95. Try them both today!

There you have it, Love Scent fans! Some pheromone combos to get you started in the exciting world of pheromone mixing. Have fun experimenting!

Have you tried any of the pheromone combos on this list? Or do you have a different mix that you’ve grown to love? Tell us about your experiences in the comments! You can also contact us with questions, comments, and concerns. And be sure to subscribe to our newsletter to get free samples and to be the first to hear about blog posts, exclusive promotions, new products, and more!