We’d like to start the new year by taking things back to basics. More specifically, we’d like to cover a topic that plenty of customers ask us about when they call or write in: how, exactly, do pheromones work? It’s an excellent question, and even if you’ve been using pheromones for a while, you may not fully know the answer! Since knowledge is power, we’d like to make sure everyone understands how pheromones work. That’s the best way to make sure you get the most out of them!

So, let’s take a moment to learn how pheromones work!

LESSON ONE: THE VNO

If you’ve ever wondered how pheromones work, you’ve probably wondered how you even detect pheromones to begin with. This question has an interesting answer: you have a special organ located in your nose designed specifically to detect pheromones! It’s called the vomeronasal organ, or VNO for short. (Some people also call it the Jacobson’s organ, after a man named Ludwig Jacobson who studied the VNO in non-human animals. Scientists usually only use “Jacobson’s organ” when talking about the VNO in animals, though!)

Here’s a diagram showing the VNO in a human: 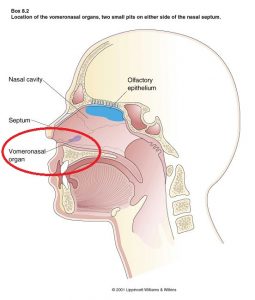 It wasn’t until the 1870s that we were certain humans even had a VNO. Scientists had speculated about it as early as the 1700s, but it wasn’t until almost two hundred years later that an anatomist named Kölliker definitively studied and described the human VNO.

When you breathe in air containing pheromones, the VNO is the organ that detects them. It then transmits the information to your brain. If you are sensitive to the pheromone you breathed in, your behavior can change dramatically after your VNO has detected it.

One interesting thing about the VNO: we still don’t know exactly how it transmits pheromone information to the brain! Whether it’s through special nerve tissues that we haven’t identified yet, or through some secondary system connected to our olfactory system, we just don’t know. Two things we do know: one, evolution designed the VNO to detect pheromones specifically; and two, pheromones do affect our behavior, so the information is getting to the brain one way or another!

Let’s take a closer look at those two facts!

LESSON TWO: PHEROMONES VS. OTHER SMELLS

While the VNO is part of the olfactory system (the part of your body that detects smells), it is a highly specialized organ. It does not detect non-pheromone smells. The rest of your olfactory system doesn’t detect pheromones, either: it detects the way they smell, but cannot transmit the pheromone-specific information to your brain. Only the VNO does that! It’s a key part, if not the key part, of how pheromones work.

So, why would our bodies have a special organ just for detecting pheromones? First of all, remember that a lot of animals have VNOs, and animals’ VNOs are also for detecting pheromones. Pheromones are extremely important in the animal kingdom. They help mark territory, signal the start of breeding season, and so on. It’s a way to subtly and quickly share a lot of information with other members of the same species.

Since humans are a highly social species, it makes sense that we would transmit pheromones too, and have an organ to detect them. Researchers believed, for a long time, that humans didn’t have a VNO, or any use for pheromones. The assumption was that we had, as a species, moved past the need for that kind of nonverbal sensory communication. Apparently, evolution disagreed: as researchers like Kölliker, Monti-Bloch, and Grosser showed, not only do we still have a VNO, we still have a functioning and specialized VNO!

You’re probably thinking: okay, we have an organ for detecting pheromones. What exactly does the brain do with that information once the VNO sends it along, though?

Let’s take a look at that!

Once the VNO detects pheromones and transmits the information to your brain, your behavior can change. The pheromones’ effects depend entirely on the type of pheromone (or pheromones) you just breathed in. Some pheromones, like AndrosteNONE, increase your interest in sex. Others, like AndrosteNOL, make you more relaxed. Others, such as AndrostaDIENONE, make you more aware of your surroundings. These effects are probably evolution’s way of making sure humans can function in groups.

How do we know all this about these pheromones? The answer: a lot of research! By exposing test subjects to pheromones and control odors and observing changes to their behavior, we can study how those pheromones affect us.

As you can see, decades of research tells us that pheromones aren’t just weird smells. They are natural chemical signals, sent from human to human, that directly impact our behavior. Apparently, evolution decided that we still need pheromones after all!

So, if you’ve ever wondered how pheromones work, now you know! We have a special organ, located in our nose, that detects those pheromones and transmits the information to our brain. Our brain then changes our behavior based on the pheromone the VNO detected. It’s all part of an ancient, natural process that has been part of us for millennia.

We hope this information has been as interesting to you as it is to us! If you have any other questions about how pheromones work, don’t hesitate to get in touch. We’re always happy to talk! You can also look at our Pheromone Science series for more details on specific pheromones!

We look forward to sharing more fascinating pheromone facts with you in the coming year!