First of all, you still have some time to take advantage of our Labor Day savings! Use the code LABORWKND at checkout to receive 30% off your order. Remember, this offer is good storewide, so you can use it to save on all your pheromone needs: pure pheromones, cover fragrances, your favorite pheromone colognes and perfumes, and more!

Now, on to this week’s topic!

This week, we’re again looking at the science behind the male sex pheromone AndrostaDIENONE. This well-researched pheromone has a fascinating range of qualities, and some very important effects on those exposed to it. We know that it makes women and men more generous, even when it puts men in a bad mood[1]; has a positive effect on women’s moods[2]; has different romantic and sexual effects based on the sexual orientation and gender of those exposed to it, with strongest effects seen in straight women and gay men[3]; and makes people more attune to visual/facial[4], but not necessarily verbal[5], emotional information. It even helps women focus better[6] in addition to putting them in a good mood. This is a versatile pheromone indeed!

This time, we’re going to take a more intensive look at how AndrostaDIENONE affects men’s and women’s ability to process emotional information. Because, as we might expect from a pheromone with such a wide range of effects, it can get a little complicated!

The research we’re looking at this week[7] revealed some interesting information about how AndrostaDIENONE attunes us to a very specific, and evolutionarily important, emotion: anger. Researches have believed for a while that humans are naturally primed to pay attention to angry faces because an angry person, or the conditions that made them angry, may pose an immediate threat to our safety[8], so we need to be prepared to deal with whatever’s coming up. (Basically, anger puts us on edge because it’s a sign that something is going wrong that we need to be aware of and address.) And, according to this research, AndrostaDIENONE may play a role in how we collect and process information about angry faces.

In this study, researchers exposed study participants to AndrostaDIENONE and a similarly-scented placebo, and then had them complete two tasks: a “dot probe task,” and an “emotional Stroop task.” These tasks are designed to test how a person pays attention to emotional information, either in the form of facial expressions or words (or, in this case, both), how accurately they interpret that emotional information, and how long it takes them to interpret it.

For the “dot probe task,” participants were exposed to either AndrostaDIENONE (masked with a musk oil cover fragrance) or the placebo (plain musk oil) in the form of a cotton pad taped to their upper lip. They were then placed in front of a black screen with a white cross in the center that they had to focus on. Two faces, one neutral and one emotional (happy, angry, fearful, etc.), flashed on the screen. The faces then disappeared, and a single white dot appearing on only one side of the screen. Participants then had to indicate which side of the screen the dot had appeared on by pressing a button. 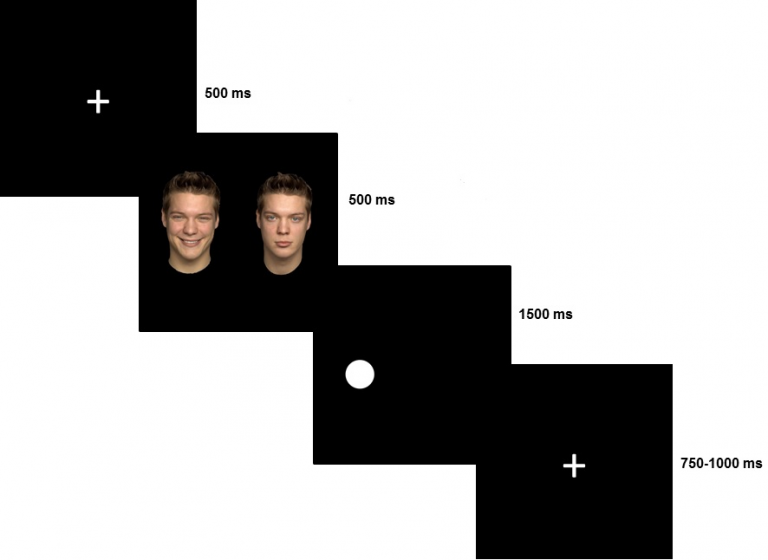 The idea behind a dot probe task is simple: presumably, a person will pay more attention to a face displaying an emotion, even if the face is displayed for only a fraction of a second, and so their attention will be on the side of the screen that showed the emotional face. Therefore, they should have an easier time correctly choosing the side of the screen the dot was on if the dot appeared on the same side of the screen as the emotional face. Researchers hypothesized that accuracy would increase even further if the dot appeared on the same side as a face that was displaying an emotion we are theoretically primed to pay more attention to, such as anger or fear.

As far as how AndrostaDIENONE might affect participants during the dot probe task, researchers were testing to see if AndrostaDIENONE made participants even more aware of the emotional faces and therefore impacted the speed with which they identified the side of the screen where the dot appeared–either by slowing them down, indicating that they were paying more attention to the emotional information and thinking harder about their answer, or by speeding them up, indicating that their subconscious recognition of emotions was aided by exposure to the pheromone.

The emotional Stroop task also had the participants looking at a screen while exposed to AndrostaDIENONE or a placebo. This time, however, they only saw one face, which was overlayed by an emotional word. The participants were asked to identify the emotion displayed by the face while ignoring the emotion expressed in the word. Sometimes the emotion of the face and the meaning of the word matched (such as the word “happy” being shown on a happy face); other times, the face and word contradicted (such as the word “fear” being shown over a happy face). This was a variation of the traditional Stroop task, which presents participants with the name of a color printed in a different color ink–such as the word “blue” written in red ink–and then asks the participants to read the word instead of saying the color of ink it was printed in. (It also wasn’t the first study to use a Stroop task to test participants’ processing of emotional information while exposed to AndrostaDIENONE.) 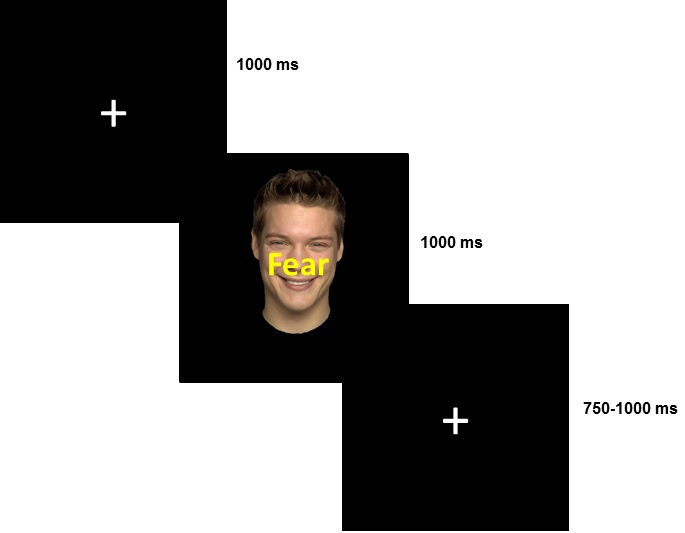 Basically, participants were presented with two pieces of directly contradictory information, and tested on two things: how well they would answer a question about one piece of that information, and how much any contradictory information–such as a word that meant something different than the emotion showed by the face–impacted reaction times and accuracy. As AndrostaDIENONE has been shown to affect how our brains process emotional information, including in other Stroop task studies, researchers hypothesized that the pheromone would impact how participants performed in the task–either by affecting the accuracy with which they identified emotions or by impacting the speed with which they were able to do it.

So, what did this study tell us about AndrostaDIENONE and emotion?

Well, first of all, researchers found that AndrostaDIENONE did not impact participants’ performance in the dot probe task. The pheromone didn’t speed up their ability to correctly identify the side of the screen where the dot appeared, nor did it slow them down. It didn’t make them choose more accurately, either. This may be due to the speed at which the faces appeared: it’s possible that the faces flashed on the screen too quickly for participants to be able to make note of the emotions on the faces, or that the pheromone interfered with their ability to process information so much that they weren’t able to process it at all when things moved too quickly. Things might have been different had the faces been on the screen longer, or they might not have. This is why further research is pretty much always needed!

In the emotional stroop task, though, things were different, and very interesting.

First, and as has been the case in many studies involving AndrostaDIENONE, researchers discovered that the participants’ performance differed based on their sex. They also found that performance changed based on the emotion being displayed.

Overall, male participants who were exposed to AndrostaDIENONE responded more quickly to contradictory sets of faces and words, as long as the face was showing anger. Contradictory sets of faces and words tended to slow down reaction times, because participants had to think harder about what they were seeing, but men didn’t move as slowly when angry faces were presented.  The pheromone did not, however, make them more likely to accurately identify the emotion on the face–it just made their response times quicker. So, they moved more quickly when seeing an angry face, but didn’t necessarily get better at recognizing the emotion for what it was.

Now, when female participants were exposed to AndrostaDIENONE, they did identify angry faces with greater accuracy. The pheromone didn’t increase their reaction time–that is, it didn’t help them perform the task more quickly by helping them process the information more quickly–but it did make them more likely to identify an angry face as an angry face, instead of mistake it for a face showing a different emotion. It also didn’t slow them down, indicating that it wasn’t making them spend more time considering the information, either.

So, what does this tell us?

Basically, it tells us that AndrostaDIENONE makes us more hyperaware of angry emotions in those around us, even if it doesn’t help us consciously recognize the emotion as anger specifically. As we said above, researchers believe that our brains are already primed to recognize some emotions, such as anger, which give us important information about our surrounding area. As AndrostaDIENONE is found in sweat, it might be that this pheromone originally served to warn other people about potentially angry individuals around us and prepare everyone in our group to both recognize an angry individual and deal with a potentially dangerous or stressful situation.

So, how does this match up with other things we know about AndrostaDIEONE, such as the fact that it puts women (but not men) in a good mood, or that it makes women and men alike more generous? There are probably a lot of possibilities, but no one knows for sure–yet! That would be an interesting topic for further research, don’t you think?

That’s all for this week, Love Scent fans! We hope you have a great weekend!

Do you use AndrostaDIENONE? How does it affect your emotional state? Do you mix it with other pheromones to improve its effects? Tell us about it in the comments! You can also contact us directly with questions, comments, stories, or concerns. And be sure to subscribe to our newsletter to be the first to hear about blog posts, vlogs, exclusive promotions, new products, and more!

3.  Savic, Ivanka et al. Brain response to putative pheromones in homosexual men. Proceedings of the National Academy of Sciences of the United States of America 102 20 (2005): 7356-61.