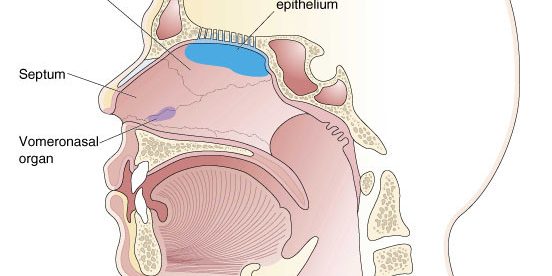 First, we hope you’ve taken advantage of our New Year’s sale! If not, don’t worry…you still have time to start 2018 off right with some awesome savings on all your Love Scent favorites. Just use the code HAPPYNEWYEAR at checkout to receive 35% off your order! This offer is good storewide, so whether you need to restock your favorite pheromones or need to replenish your cover scents and atomizers, we’ve got you covered!

Second, let’s turn to today’s topic: the vomeronasal organ, or VNO for short.

The VNO is a fascinating little organ with an equally fascinating history. You can find it in many animals, including reptiles, amphibians, and mammals (including humans). It’s part of the olfactory system, which detects scents and other chemical signals in the air. But the VNO isn’t responsible for detecting regular smells; it specifically detects pheromones.

For a long time, researchers didn’t believe that humans had a VNO. We knew that pheromones played a huge role in the day-to-day lives of other animals, and that pheromone signals are responsible for everything from helping animals avoid danger to helping them find and attract a mate. But it was assumed that humans did not need these signals any more, because we had developed language, culture, complex social structures, and other ways of serving the same purposes.

But then, in the early 1700s, an anatomist named Frederick Ruysch described something similar to a VNO in human infants, though he did not identify it as anything specific or give it a name. Later, in 1877, another anatomist named Albert von Kölliker actually described the VNO in humans. He called it the “Jacobson’s organ,” after the biologist Ludwig Jacobson who had extensively studied the VNO in animals[1]. Today, the VNO is still sometimes referred to as the Jacobson’s organ, particularly when discussing its presence in animals.

Your VNO is located in your nose, above the roof of your mouth. It is located near, but not in, the olfactory epithelium (or OE), which is responsible for detecting regular smells. Take a look: 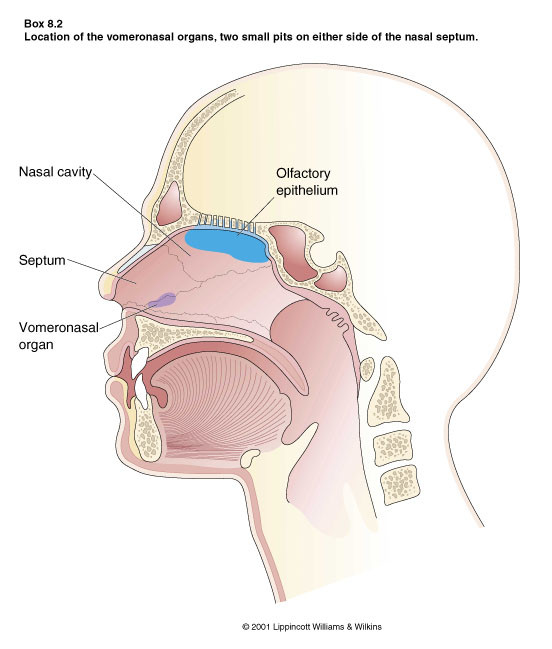 While the VNO was discovered a long time ago, there was a lot of debate among anatomists and biologists about the role it played in humans. Many researchers considered the human VNO a “vestigial organ,” meaning that it was simply left over from an earlier time in our evolutionary history, when we were more dependent on pheromones. Their doubts were somewhat understandable: different people have VNOs of different sizes, and the organ doesn’t look quite the same as it does in many animals. These inconsistencies made researchers wonder if the VNO served the same purpose in humans; some researchers believed that the VNO wasn’t connected to the rest of the olfactory system at all. Debates over the VNO, and what role (if any) it played in our lives, went on for decades. Limits in technology made it even more difficult to pin down the purpose of the VNO.

This told us two things: one, the VNO does detect pheromones, but not other scents; and two, the OE detects regular scents, but not pheromones. In other words, the VNO does play a unique role in detecting specific chemical signals in the air.

The exact way that the VNO sends this information to the brain is not fully understood yet. It may be transferred through special nerve tissue that researchers haven’t yet identified, or it may be through a secondary system in our bodies. We do know from other studies that exposure to pheromones can influence human behavior (take a look at our Pheromone Science posts for more details), so we know the information is getting to the brain one way or another. More research into the VNO may eventually tell us exactly how pheromone information goes from the detection centers in the VNO to the brain. For now, though, the specifics are one of the many mysteries of the human body.

So, what does all this mean you for, as someone who is interested in and probably uses pheromones?

Well, for starters, it may help explain why different people have different responses to pheromones. We know that pheromones that work wonders on one person may have no significant effect on someone else; this may be due to natural variations in the size and sensitivity of the VNO, or a combination of factors including your own body chemistry and an individual person’s associations with a particular pheromone. Whatever the reason, this variation on potential effects is why we recommend trying several different pheromones to see what works best for you. It’s also why you shouldn’t give up on pheromones if the first one you try doesn’t live up to your expectations: you probably just need to try something else.

Additionally, you can now see why cover scents do not mask or interfere with pheromones. Many people hesitate to use cover scents because they are worried that their cologne or perfume will make the pheromones impossible to detect. But, as we explained above, the VNO doesn’t even respond to non-pheromone smells like oils or perfumes. So a cover scent only masks the smelly parts of pheromones that your OE can detect; doesn’t interfere with the VNO at all. And because non-pheromone scents also play a huge role in our lives, the right cover scent can increase your chance of success when using pheromones to attract or otherwise influence people. Moral of the story: don’t skip the cover scent!

Finally, it’s important to remember that there is a lot left to learn, not only about the VNO but about pheromones in general. Research is ongoing. In future years, we may identify more human pheromones, learn more about how the VNO sends information to the brain, and discover new ways that pheromones influence our lives. We hope you are as excited as we are to learn more about all of it!

That’s all for this week, Love Scent fans. We hope you now have a better understanding of how pheromones work, and the role the VNO plays in your life!

As always, feel free to contact us directly with any questions, comments, or concerns. And be sure to subscribe to our newsletter to hear about blog posts, exclusive promotions, new products, and more!